Sean Patrick Maloney on Health Care and Free Speech - Progressive or For Sale?

Maloney is the U.S. Congressional rep from New York's 18th District in the lower Hudson Valley, serving Orange and parts of Westchester County. He: Opposes Single-Payer/Medicare for all. While he pays lip service to single payer being a great solution, he can't bring himself to co-sponsor bill 676 by Rep. Conyers to bring about a single payer/Medicare for All solution. Is it the fact that Rep. Maloney takes large campaing contributions from Insurance and Big Pharma lobbies that prevent him from doing so?

Supporting Links
Maloney's Big Pharma contributions from Public Citizen. See p. 17 for the $27,950 contribution.
Senator Elizabeth Warren on how Democrats need to get behind Single Payer.

Maloney Supports the Israel Anti-Boycott bill, undermining American's freedom of speech. Americans could go to jail and or be fined for deciding not to do business with Israeli companies as a result of exercising Constitutionally protected speech in their consumer and business decisions. For example, this law Maloney supports would put you in jail if you decided to buy tomatoes from Canada instead of tomatoes from Israel you suspect were from illegal settlements because you don't want to support their illegal occupation of Palestine.

Posted by John Elfrank-Dana at 8:32 AM No comments:

My Bit of Fake News!

Tweet
I had a lot of fun pranking friends with this one. Before, I was fourth rate. I am up a notch! LOL
Many thanks to Harris Lertzman for showing me this first. "@TrumpInsulter" should tip people off. 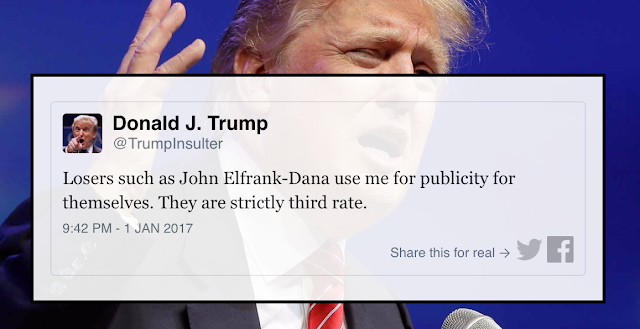 Posted by John Elfrank-Dana at 10:04 AM No comments:

Tweet
You have to be careful how you read the chart. It just stacks the amounts. Subtract $350bn from $567bn and you have China's amount. $217 bn - far less than half our spending, which, ironically, is partially financed by China. Russia comes in at 1/10th our spending. Granted, spending is probably not proportional to predicting the likelihood of prevailing in a conflict. Odds are we would all be dead in the end from a direct confrontation with China or Russia. Look at Saudi Arabia. You know where they get their weapons? From us.

Posted by John Elfrank-Dana at 7:47 AM No comments:

Compare these to headlines.

From their email alert:

compared to their headline for the article

They say different things. The latter is more accurate but still misleading based on their own reporting. They said a laptop at the utility (owned by whom?) that was NOT connected to the grid, had some malware on it, supposedly of the variety associated with Russian hackers. They offer no proof of a Russian operation.

Oh ya, and the story relies on anonymous sources. As does this piece below.

Add to this just another example of their ProporNot piece. See the background reading:

The Intercept Outs the WP on Neo-McCarthyite Group

Posted by John Elfrank-Dana at 7:04 AM No comments:

The Hoopla Over Alleged Putin Meddling - A guest post...

"Grizzly Steppe" hah
They released nothing, nada, zero, zilch, beyond fuzzy insinuations that in no way corroborate the Putin hacked our elections mendacity.
To wit, the report begins with this ominous assertion, "However, public attribution of these activities to RIS is supported by technical indicators from the U.S. Intelligence Community, DHS, FBI, the private sector, and other entities."  Okay so far. There's a preponderance of evidence and we're about to find out the details.
But consider the slippery premise that the entire argument hangs on, "technical details regarding the tools and infrastructure used by the Russian civilian and military intelligence Services (RIS)." And that's it!  No further distinction between the two crucially different categories provided, just "RIS", "RIS actors", or "RIS cyber-actors," from then on, except for one deviation at the bottom of page three where the authors helpfully denote another version of the culprit: "Actors likely associated with RIS are continuing to engage in spearphishing campaigns, including one launched as recently as November 2016, just days after the U.S. election."
Seriously?  "Actors likely associated with RIS ..."  What constitutes "associate with"?  What does "likely" entail and how do these people differ from "RIS actors" above? They Got Nothing!
Of course "Russian civilian and military intelligence" is cleverly worded to imply that "Russian civilian" belongs to "intelligence services", instead of constituting its own category.  So, unlike America where many hackers and hacking groups are clearly on their own and even adversarial to government intelligence agencies, in Russia, they're all known to and work for, an arm of we might say, the Kremlin.  Credit card scammers, bored computer geeks, phishers and blackmailers, for the thrill of it malware designers, disaffected server techs, geeks with a grudge against the US Olympic Hockey Team, phishing and retired military techs with time on their hands, ... all their deeds are explicitly directed by Russian spy agencies and personally approved by Putin.  That's plausible!  They Got Nothing!
Page four of the "report" lays out all 48 of the cool names our American spies came up with for "Reported Russian Military and Civilian Intelligence Services (RIS)" like "Onionduke", "Sandworm," and my personal favorite "Crouching Yeti".  And while at first it seemed odd and a lil heavy-handed that "Grizzly Steppe" was the only name in 49 to specify a particular geographic feature indelibly associated with Russia, once you run into "Fancy Bear," "Energetic Bear," and "COZYBEAR," the ursine pedigree of "Grizzly" is apparent. Oh, don't forget "reported" -- still another wishy-washy, mealy-mouthed, lower branch on the decline of certainty and attribution.
They Got Nothing!
And they think we're stupid and brainwashed.
The Mainstream Media is already selling it as conclusive proof.

Background Story From: The Hill

Farina's Compliance Clerks and the End of Educational Leadership and Unionism

Tweet
In an email 12/23/15 to fellow educators I discuss the end of educational leadership and unionism and the triumph of compliance and intimidation:

I am back after 6 months on medical leave. The Compliance Clerks (formerly known and principal and dept. AP) have wasted no time in investigating (formerly known as observation) my classroom- 6 times in the past 5 weeks. All drop-ins. Superintendent was in one, principal in a couple, principal's mentor in another and AP in the rest.

I suppose I should be grateful they are here to help. But, that's not the case. The new model, hence the term- Compliance Clerk, is just to evaluate; to determine who they can run out. I got this from the principal's mentor last year in a meeting, and it's the only explanation that makes sense. When I said the principal and AP have very little experience and subject matter expertise, nor do they even teach a class, it is obvious they have zero capacity to lead by example. He said that's not what they are here to do. The new model makes them just a kind of Compliance Clerk or Danielson rubric technicians (my interpretation). It's valid, and I respect the mentor's honesty.  But, that's not the impression they give.

Since they are not here to help, I won't waste my time with the illusion of due diligence in the form of feedback meetings, pre-formal observations, etc. Why participate in a fraud? This new model may not have hit your school but it will eventually. It's bad for the administrators too. Imagine being put into a situation where you are pretending to lead but cannot?

And speaking of Illusions; the UFT (teachers union) plays its part too. They have put in place an appeals process and the APPR (Annual Profession Performance Review) complaint form to give the members the feeling like they have recourse for unfair evaluations.   I have been a chapter leader for 9 years and have yet to see an appeal reverse a decision more than once out of dozens of cases, or an APPR complaint have any kind of impact. If I am wrong let the UFT publish its statistics on rating reversals as a result of their appeals process. But, don't hold your breath.

The grievance process is the same illusion. Yes, you can file a grievance, let's say for illegally excessing your newly elected chapter leader (a true case a Murry Bergtraum).  You file a grievance, it goes to Step 1 after a week when you meet with the principal. He/She always upholds their decision. You escalate to Step 2 if the UFT agrees. If they do you wait a month or more for a step 2. They did in this case. During the step 2 the principal brushed off the call in the Step 2 process and you have to reschedule. This was back in November. Still waiting... Maybe by August the step 2 will happen. Then the UFT, if the past is any guide, will reject going to arbitration when they find out they lose at step 2 (which is assuredly the case). The result: Murry Bergtraum High School has no union representation. The first time in over nearly 40 years.

Score 1 for the Compliance Clerks. Score 1 for the UFT? Since new teachers hired to replace senior teachers run out of the system pay the same dues, the UFT doubles its money as two teachers paying the same amount of dues each at the bottom rate can be hired.

Do you think it needs to change? There's a UFT election this spring. Tell your colleagues not to throw their ballot in the garbage for a change. The vast majority do. Mulgrew was elected by retirees (why he campaigns in Boca Raton, Fl.). There are good people running against the Mulgrew/Unity old guard. MORE and Solidarity. While I know Francesco Portelos as a courageous fighter,  I am endorsing MORE as I think they have the most democratic form of organization and also have a strong leader in Jia Lee. We need a democratic union for a start.

Happy Holiday and In Solidarity!
Posted by John Elfrank-Dana at 8:03 AM No comments:

Like Teaching a Class with no Mobile Phone Discipline

Tweet
This is exactly what it is like trying to corral a group of teenagers to focus on a lesson with no social discipline or mobile phone impulse control. See video: https://www.youtube.com/watch?v=Pa0wXSh4I34

Teachers, can you relate?
Posted by John Elfrank-Dana at 8:38 AM No comments:

Tweet
...a true patriot in the service of all that is right and fair in education in the service of children. It has been my honor to serve as Nicholas Weber's representative at Murry Bergtraum. I invite you to explore his thoughts on this, his new web site. 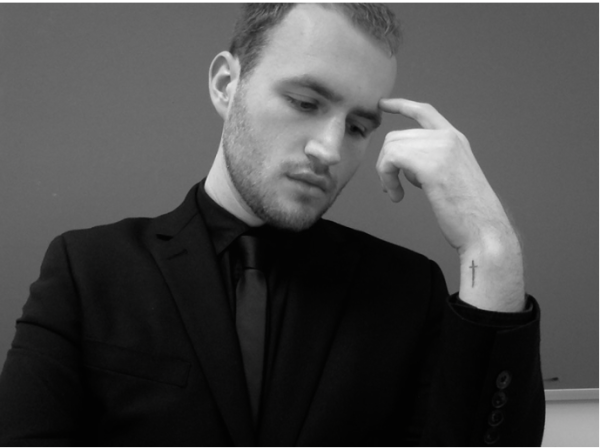