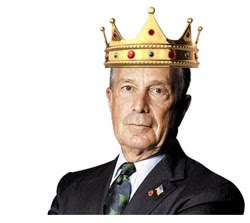 I felt this worth the repost. In shock and awe that my union leadership is stumping for reauthorization.

In NYC it has been a corporate-style takeover; with wiping the slate clean (of personnel they could fire) and starting from scratch. It was recless without regard for human relations, insitutuional memory and professional communities long in place. If you were part of the past system you had nothing to offer and needed to be expunged. This is Mayor Bloomberg and Chancellor Klien's "Zero Year".

Chancellor Joel Klein also used public relations techniques with those he couldn’t outright dismiss. He visited our school, Murry Bergtraum High School, shortly after regime change in 2001 with a “town hall meeting”. It was run Bush-style, no questions taking by the Chancellor; one-way communications. Then they broke up the meeting into focus groups of parents and teachers. In these breakout sessions DOE underlings listened and took notes like they were interested in what we had to say. Nothing ever came of our comments; no analysis or reporting back. It’s like they took our feedback, and with our backs turned, chucked it into the garbage.

Things have been run that way ever since. Principals now look over their shoulders in fear, as managers do in the corporate world, for who is going to get the axe next. Mayor Michael Bloomberg and Klein have a mechanistic and reductionist view of education. That is, you can micromanage and script teachers, whose measure of success can totally be assessed by the standardized test scores of their students. There has been mass demoralization of educators, while parental involvement in our school has plummeted.

Such management style comes from the Theory X view of human motivation you will find in the organizational theory literature. In the early 20th century a social scientist named Taylor developed a theory premised on the belief that workers were basically lazy and stupid. They responded only to external motivations- rewards or punishments. Hence we have the mayor’s “merit pay” for teachers and “accountability” for students that makes learning not fun but serious business, supporting the “feel bad” education environment. Why else would Klein recruit the likes of Jack Welch, the former CEO of General Electric, who boasted of creating a climate of fear for his employees, to set the standard of leadership for the DOE’s principals' institute? Mayor Bloomberg demonstrated just how committed he was to an openness to ideas by creating the Panel for Educational Policy, only to fire some of them when they were going to rule against his anti-social promotion scheme. That’s the kind of bureaucracy management we used to see in the old Soviet Union and dovetails with the poisonous pedagogy of the No Child Left Behind Act. At least with the old Board of Education, there were some members you could reach and convince to advocate for your school or a special program you were involved in. They didn't view veteran teachers a pariahs but conveyers of experience and institutional memory. Now there’s an unaccountable corporate bureaucracy in the DOE, wanting to implement the Zero Year.

On the other side of the spectrum Theory Y states that people have an inherent tendency for growth and creativity. This theory came out of the humanist school of psychology. It’s the premise this teacher operates on in his class. Democracy is taught as a value in and of itself; that the exercise of freedom allows one to create meaning and engage in and shape societal change as a natural right. The primary accountability is to oneself, premised on the view of Socrates that, “The unexamined life is not worth living.”

Only an educational system true to the ideals of democracy, where individuals take responsibility for their freedom; to learn what they will and how they will, with the guidance of a teacher who has only the student’s interest in mind, not a salary increase, can serve a free society. Such a system will put the students, teachers, parents and local administrators as equal partners in the driver’s seat with the standards of success to be determined by and for the these stakeholders.

Albert Einstein, a charter member of the American Federation of Teachers, said, “It’s the supreme art of the teacher to awaken joy in creative expression and knowledge.” Einstein had the audacity to consider that the motivation for learning could be intrinsic and that teachers should become expert at nudging it and creating opportunities for such joy to come alive and grow. Our educational systems must become democratic and not remain bureaucratic to nurture such joy. Corporate dictatorial bureaucracy is to joy of learning as a straight jacket is to dance. Bloomberg's experiement is a failure, it's time for something different.