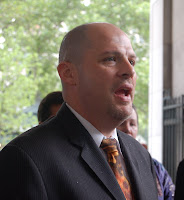 ...you will be elected by only about 25% of the membership. Isn't that a bad thing?"

What I was hoping to hear in response at the "Meet the President" dinner in Chinatown last week was... "You are right, John. It's not a good thing and this union (UFT) has to do something about member apathy and low participation in union elections. Let's put together a study group." That's what Randi Weingarten would have said anyway.

But instead I got the old- Whatta gonna do??? Michael Mulgrew asked the crowd, "How many of you get more than 50% at your chapter elections?" Some hands went up (obviously they missed their cue). He was resigned to the fact that dismal member turnout (about 30%) for union-wide elections was a problem beyond our control.

Some would argue it's by design. That the Unity Caucus, the political machine that runs the UFT, doesn't want broader participation. Otherwise, their candidates might not get elected.

But, Mulgrew assured us we are a democratic union. After all, the membership was surveyed about what their concerns were about the contract. That information was passed to a member negotiation committee. Nothing wrong with that. But, it seems the UFT did this the last time and the union was quietly running focus groups on the new contract while the negotiating committee was toiling away in the dark (unaware that a deal had been cut for a renewal of the 2005 contract with money between 6 and 8 percent). I know. I was in one of those focus groups. So was a surprised member of the negotiating committee.

This brings up the question: Why doesn't the UFT endorse Thompson for mayor? Instead, it is all very quiet. Was there a deal already cut by Randi on her way down to Washington with King Michael Bloomberg? We won't oppose you if...
One thing is for sure, they won't come to our school for a focus group anytime soon. At least we have better member participation in our school elections.
Posted by John Elfrank-Dana at 8:53 AM

Thanks for raising the question to the new president, as he confirmed what was already known.I like to remind teachers how much they are paying in their dues to keep silent.

Yes, Diane we need to ask what our dues are being used for. Also, note that the no layoff provision from the last two contracts keeps union dues flowing. I wonder if they sold us for that; Klein can micromanage the classroom, discriminate against senior teachers- just keep the dues flowing to 52 Broadway.