OBAMA to Unions - F YOU! 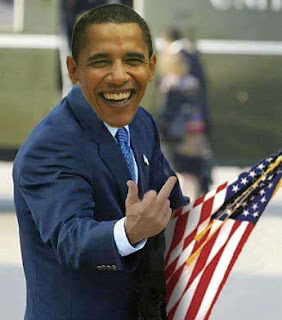 I didn't vote for Barack Obama, although I said I was glad he won. I think it was good for the nation in general to help move us ahead on the racial issue. However, I knew he had morphed into a corporate flunky as he ran for president. I knew also that he was not the best candidate for education, buying the corporate rhetoric on so called "accountability" and charter schools. The community organizer chose a community destroyer in Arnie Duncan for Education Secretary, who prided himself on firing the entire school staff and starting a new school. Often times in Chicago this meant sending students across town through dangerous neighborhoods to their new schools. Just Google the so called "Chicago Miracle" and you'll find out it has gotten very mixed reviews, even from Chicago's own business community.

So when President Obama applauded the mass firing of our union bothers and sisters in Central Falls, Rhode Island last month I was appalled. These are people who served an extremely poor community, with an median household income of about $28,000. These kids came from dirt poor households. With it, as any community organizer should know, are all the problems of poverty. These problems produce children less ready to learn than their middle-class suburban counterparts.

Studies have shown how children from lower socio-economic neighborhoods are read to less, talked to less, don't eat as well, and are physically punished much more often. All of this produces high need students. And in Central Falls, I'm confident, this was the bulk of students in that district.

Should there be any surprise that these students have high dropout rates? Obama decided to join the bandwagon of blame the teachers. Teachers are the largest population of organized labor in the country. The agenda to privatize much of public education in this country is premised on busting these urban unions like the AFT.

Obama is a corporate stooge. He has sided with the enemies of working people. Organized labor needs to consider its options in building a labor party; as the corporate Democrats have for too long used the labor vote in this country while backing the corporate agenda of privatization.

It's class warfare. And until labor leaders in this country realize this they will continue to lead us to the slaughter. Teacher union leaders need to stop fraternizing with the corporadoes. They need to educate the American working class about the benefits of solidarity and collective bargaining. They need to turn the tide of this class war in favor of working people. There's no more appropriate group to take the lead than teachers.
Posted by John Elfrank-Dana at 8:57 AM

I'm done with this guy. This is pure treason against the working class. However, we will soon face worse troubles with Republican Tea Party fascists. I piss on American politics.

I have no idea what we did to this man. Maybe he had a bad experience as a kid and now he's throwing it back in our faces.

It's just another indication of something I've been thinking about for awhile, which is that America in general, really doesn't care about education. They refuse to open their eyes and look at the major issues affecting these children. Instead, they throw teachers under the bus when a student fails, all the while talking about things like "rigor", but expecting us to have exceedingly high pass rates.

There is so much wrong with our current system, that I don't even know where to begin. Obama needs to wake up and realize that the teachers are not the enemy here, they are in fact, the ones who are on the front line everyday, working in highly difficult situations doing everything possible to help these students ACHIEVE.

It's funny that now that the Annointed One is getting on teachers he's a bad guy. The writing was on the wall from the beginning and the "change we can believe in" has turned out to be "change that we can't believe!!" Now that he is going after teachers maybe you will all wise up!!

Anonymous said...
This comment has been removed by a blog administrator.
2:44 AM