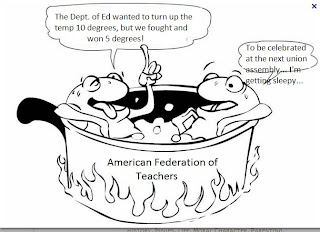 All of this pondering of the demise of public education and teacher unions at the Save our Schools Convention (SOS) reminds me of the parable of the frog in a pot of water. It goes that if you put a frog in boiling water it will jump out to save itself. However, take that same frog and put it in room temperature water, but put the flame on low and it will be dead before it realizes the gradual change in temperature. More on this down below.

At the SOS Convention this weekend a stark warning from an recent former United Federation  of Teachers (UFT) executive now working at the American Federation of Teachers national office came to the delegates in the Teacher Unions committee- "If you draw a line in the sand you'd better be prepared to defend that ground to avoid a routing that could destroy you." In other words, a union had better be prepared to strike as a last resort and win that strike. That message is a prudent one; common sense taken at face value. But, to take it as sufficient reason to accept more concessions by the AFT in teacher evaluations based on test scores and giving back tenure is mistaken in my estimation.

Since, in my opinion, the UFT is nowhere close to being prepared to strike, the message my members (I am a chapter leader of one of the last large high schools in New York City), accept these concessions or face doom. A more cynical view has been that the UFT uses the threat of a strike and certain doom to scare members into accepting contract givebacks. I have seen this myself, when union brass visited our high school around the last two contracts- saying you'd better accept this or else! Since the leadership does nothing to prepare us for a strike, the threat works, "give up grieving a letter in the file, no seniority transfer? or else strike? Where do I sign?" That was the 2005 UFT contract, and along with UFT President Randi Weingarten support for Mayoral Control, that may have sealed our fate as a union.

Back to the frog parable: Our teacher union members in NYC are like frogs in the pot on the stove with the flame on low. Union concessions on core rights constitute the rising water temperature in our frog pot. As we become aware of the situation (we do have some capacity to be aware, unlike frogs) some of us stir that maybe we should consider jumping out (strike?) to save our selves (at least begin to prepare for one). Ah, but the union executive says, "If you jump out of this pot how do you know you won't fall all the way to the kitchen floor and go splat!? Or, perhaps land in the flame of the burner next to this one?" He continues, "Hang in there! Our union president just negotiated a great victory. The DoE wants to turn the flame up another 10 degrees, but we got them down to an increase in only 5 degrees! (ironically working in the DoE's favor- for god forbid the other frogs wake up to what is happening). We will celebrate at the next Delegate Assembly."

Without a credible threat of a strike, you have no union. All you have is a dues collection agency, a member benefits management office, an ombudsman's office of the DoE, a teacher public relations firm. (To be clear it's a policy issue; most the staffers I find at the UFT offices are dedicated and serve the membership well- yet they are constrained by the contracts that define the services they can provide. It bothers me that some staffers take criticism of the union policy like treason. Staffers should be neutral.) But, you don't have a union without a strike. We can't rely only on court cases, or getting "our guy" in office to protect our rights. The ultimate weapon must be in the arsenal.

I don't take strikes lightly. I am aware of the Taylor Law penalties. I was a Teamster in college when I went out on strike the first time. I have been involved in two strikes and a lockout. I have seen people get their heads split open. Preparing for a strike requires digging in, years of building relations with the parents, polticos, press and most importantly your members. It's a capacity you have to have ready at all times.

I had the audacity to suggest this weekend at the SOS convention that SOS exists mainly because of the failure of our teacher unions to protect the profession and quality public education. It was dismissed forthwith by the union committee there without any exploration. My work there was finished because it was an essential premise, in my mind, to drive SOS's recommendations to unions. They would have included the imperatives to democratize how they operate (UFT has adopted a corporate structure by appointing reps instead of electing them) and to make mission critical strike preparedness; two critical ingredients to help revive their relevance.

So, let's get behind our courageous brothers and sisters of the Chicago Teachers Union! They have built the credible threat of a strike. They can serve a model of courage and character for all of us. Those frogs have jumping legs! Take a close look at MORE and ICE in NYC for ideas about moving forward.

Posted by John Elfrank-Dana at 8:08 AM

Exactly! That's the "digging in" process of education of the members by setting example, and opening eyes. It takes a while. I regret not asking our AFT rep, "So what do we do to expand the ground we CAN defend? and, Why aren't we doing that? Seems like accepting more concessions is not moving in that direction."