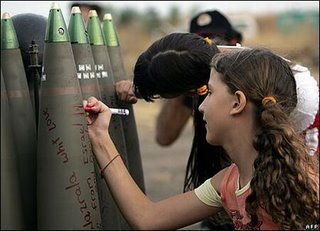 The AFT - UFT resolution on the Middle East crisis ( http://www.aft.org/about/resolutions/2006/terrorism.htm ), passed last July, at the annual convention will go down in our union’s history as one its worst moments. As someone who believes in Israel’s right to exist in peace and prosperity with everyone in the region, I find it disturbing when my union endorses actions by Israel that only serves to undermine this right in the end.

You can see where the resolution is going right from the start:
“terrorism is the use of violence to impose the will of a minority on society…”
As a social studies teacher I am embarrassed by this definition. It sounds like something out of Fox News. If you look at the U.S. Code, the definition of “terrorism” mentions nothing about minority groups as a necessary precondition. This loaded, and presumably off-the-cuff, definition by the AFT may be intended to protect the U.S. and Israel; albeit that might be giving the authors of the resolution too much credit. Look at the U.S. official definition and you’ll see:

By this criteria the U.S. and Israel (as well as our official enemies) have actively engaged in terrorism against other nations: hiring the mafia to kill Castro in the ‘60s, indiscriminate and carpet-bombings causing many civilian deaths, destruction of civilian infrastructure, collective punishment (bulldozing of homes), “targeted assassination”, are to name but a few and a variety of contexts over the years committed by the U.S and Israel, all in the name of fighting communism and now, ironically, “terrorism”.

The resolution continues with more misconceptions and mythical history. It lumps Hezbollah in the same ball of wax as Al Qaeda. This sort of simplicity one would expect from the Neocons. Granted, both qualify as “terrorist” organizations under U.S. code. However, Israel has bargained with Hezbollah in the past for prisoner exchanges (hence, part of the motivation for Hezbollah taking the Israeli soldiers, the other part showing solidarity with Palestinians in Gaza). Israel holds thousands of Palestinian and Lebanese prisoners it has “detained”. It also tortures many of them. But, don’t take my word for it, check it out with B’ Tselem, the Israeli human rights organization (http://www.btselem.org/english/Torture/Index.asp). You can check Human Rights Watch and Amnesty International as well. Either way, a bargaining partner is something Al Qaeda is not. Such oversimplifications are what has been driving U.S. foreign policy under Bush.

The resolution says Hezbollah was the group that blew up the barracks where “241 U.S. marine peacekeepers were murdered”. While it might be true they committed this deplorable act one needs to put it in context. It was only after the U.S. abandoned its peacekeeper role in Lebanon in 1983 and started shelling (bombing from the USS New Jersey) Syrian and Palestinian positions in support of one side in the conflict that Hezbollah attacked. If you want to call that bombing of the Marine barracks under these circumstances “murder” then to be consistent you must call the Israeli or U.S. bombing of anyone who kills their soldiers and/or civilians “murder”.

The resolution goes on: “on July 12, 2006, armed Hezbollah terrorists supported by Iran and Syria and based in Lebanon crossed the internationally recognized border between Lebanon and Israel and killed eight Israeli soldiers and abducted two others back across the border to Lebanon;”

Actually, there’s some debate about where the soldiers were abducted. The original AP report says they were take IN Lebanon, subsequent reports were more vague. Again, it does not change the fact that BOTH SIDES kidnap and hold prisoners; the Israelis with greater veracity than Hezbollah. The Israeli Supreme Court even legalized the taking of hostages in 1997, saying Israel had a right to collect “bargaining chips”.
See: http://jurist.law.pitt.edu/forumy/2006/05/guantanamo-exported-illegal-combatants.php There’s a link to the decision (in Hebrew). That ruling was later overturned. Again, knowing the context helps to take the energy out of the UFT's jingo.

On to Gaza.
The time line assumed by the resolution starts with the taking of the Israeli soldier by Palestinian militants (Hamas automatically assumed responsible). But, could the real reason for the invasion of Gaza be that Hamas recognized the State of Israel earlier that same day, thus Israel needing an diversion to get that fact off the headlines? See: http://news.bbc.co.uk/2/hi/middle_east/5121164.stm Or, is the timing of the Gaza invasion merely a coincidence? Again, for a country that holds Palestinian and Lebanese (prisoners without charge or trial, in effect “hostages” or “bargaining chips”), the invasion of Gaza and mass killing of civilians is way out of proportion. The same applies to Hezbollah; the argument that the killing of hundreds, probably thousands in the end, of Lebanese civilians because of the kidnapping incident is very implausible. It’s not the rocket attacks on northern Israel, for if you check the time line, Hezbollah rockets come after Israel started its bombing of Lebanon.
The resolution concludes with calls for the international community to support Israel’s right to defend itself. It seems that if one really wants to support Israel, he had better take a more honest look at the history surrounding the situation. So long as Israel continues to break international law through the illegal and brutal occupation of Palestine, it will not know peace. Many of my Israeli friends agree with me on this point. Indeed, it’s their opinions that have helped shape mine.

Toward the end of his life Albert Einstein wrote:
“…my awareness of the essential nature of Judaism resists the idea of a Jewish state with borders, an army, and a measure of temporal power no matter how modest. I am afraid of the inner damage Judaism will sustain…” Out of My Later Years, p. 263 (Einstein in his own words, available through Amazon.com).

I hope Einstein was wrong. As an American I cannot support, through financial means and military equipment, Israel’s behavior; just as I denounce all forms of violence, including that against Israel. Support for Israeli brutality (terrorism?), as with the AFT resolution, does damage to Israel by supporting an “ends justifies the means” principle. I hold out hope for a peaceful resolution to the problems of the Middle East. However, the killing must stop from all sides, the disenfranchisement and illegal occupation of Palestine must stop and an honest facing of history must begin to build such hope.