When Hope Comes to a Halt... 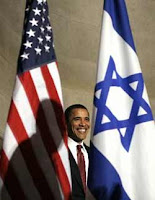 Obama falls in line on Israel/Gaza
Today President Obama reiterated what was for the most part the same old Bush policy on Israel and Palestine ignoring the core issues that prevent a lasting peace. He started off claiming Israel has a right to defend itself. There's no argument with that. However, it's void of any context. The fact that Israel had non-violent means of stopping the Hamas rockets, by continuing to obey the ceasefire it broke on Nov. 4, 2008 (see prior post), and/or ending its illegal blockade, was not considered by the new president. International law requires nations to exhaust non-violent means first in their self-defense. Even this is a bit gratuitous since Israel unilaterally ended the ceasefire on Nov4.

To listen to Noam Chomsky explain it go to:
http://www.democracynow.org/2009/1/23/noam_chomsky_obamas_stance_on_gaza

Posted by John Elfrank-Dana at 9:39 AM