On Gaza: I have been active on Facebook and present here an anthology.

July 18, 2014
What are the odds an Israeli will be killed in a car crash compared to the odds of being killed by a Hamas rocket? About 100 to 1. Love Israel? Send money for drivers ed and not weapons. Oh yes, and tell them to end all illegal occupations and blockades too. 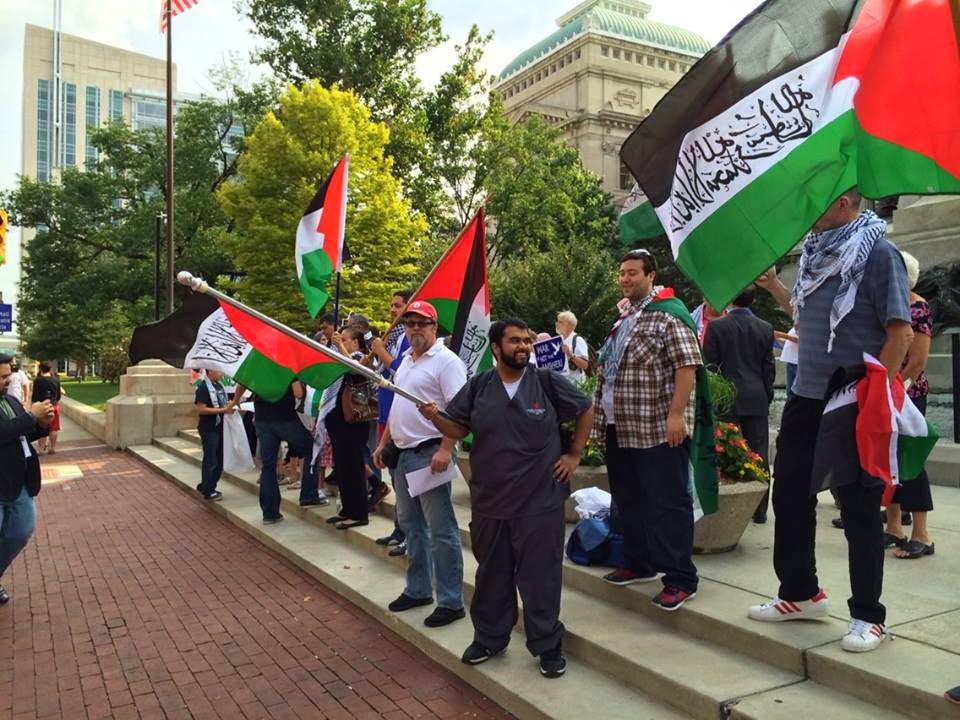 At a pro peace rally in Indianapolis 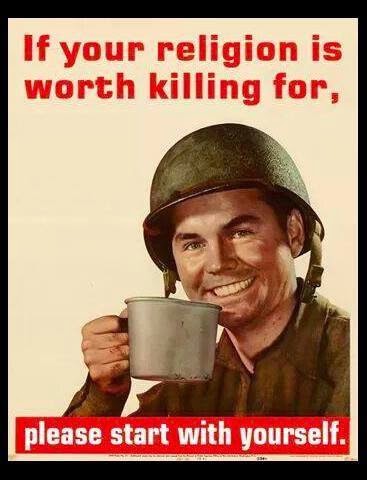 This refers to any religion

August 10, 2014
Israeli employees fired for speaking out against attack on Gaza.
If Israel is a democracy, and they have a free press, then this practice should stop. Gideon Levy, the Haaretz journalist and commentator, has had his life threatened for being critical of the Israeli bombardment of Gaza. Since the outbreak of the conflict in Gaza, dozens of Palestinian Israelis have been fired from their jobs for expressing their opposition to the war on social networks. We spoke to Gadeer Nicola, a lawyer and coordinator of the Nazareth branch of NIF grantee Workers Hotline, to hear about the efforts to fight back and promote freedom of expression. See full article


August 10, 2014
Can I, as a US citizen, donate to this organization?
B'Tselem is the Israeli human rights organization. The bulk of my information comes from progressive Jewish and Israeli sources.

Updated:
During the fighting in Gaza, dozens of residences were bombed while residents were at home. The following infographic lists members of families killed in their homes in 72 incidents of bombing or shelling. In these incidents, 547 people were killed, including 125 women under the age of 60, 250 minors, and 29 people over the age of 60. Mouse over the houses for more details.
The figures B’Tselem collected regarding the number of Palestinians killed in the course of the fighting in the Gaza Strip are very preliminary, and are still being cross-referenced and checked. In the months ahead, B’Tselem plans to further investigate the incidents, including confirming the identity of the individuals killed and whether or not they took part in the hostilities. 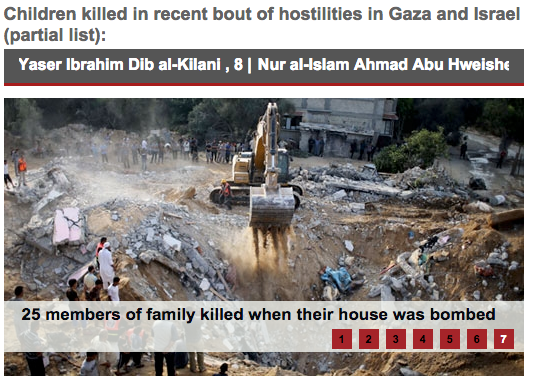 Sept. 1, Postscript by me.
Remember 100 to 1 Israeli death by car crash as opposed to Hamas "rocket"... Rockets are the excuse now since it was revealed Hamas didn't kill the 3 Israeli teens. But, that was revealed too late. So, like the rational from WMD to Democracy the US used in Iraq, Israel plays the slight of hand.

August 10, 2014
I don't share the voices of extremism here. Whether it's Palestinian extremists calling for the extermination of Jews (which the vast majority do not) or Israelis who call for the extermination of the Arabs (as which the vast majority do not). This young man's opinion I believe is that of the mainstream in the world.
BTW, MondoWeiss.net is an invaluable source of information for anyone wanting a progressive Jewish analysis.

Jewish boy thrills London in the name of his ancestors: I too am Palestinian!
mondoweiss.net
Today the Day of Rage demonstrations are taking place in cities all over the world, demanding immediate sanctions on Israel. We're expecting reports to start rolling in, here's our first one....

Holocaust Honor From Israel Is Sent Back After Gaza Deaths
www.nytimes.com
Henk Zanoli, who saved a Jewish boy in 1943, said he could not keep the award after six relatives of his grandniece’s Palestinian husband were killed in Gaza last month.

Israelis on Facebook wish death for Holocaust survivors against ‘Protective Edge’ | +972 Magazine
972mag.com
Nope, it’s not The Onion. A few days ago some 300 Holocaust survivors placed an ad in the New York Times condemning the massacre in Gaza. My colleague from Local Call, John Brown,...

Stop the Violence from Ferguson to Gaza: 90-Year-Old Holocaust Survivor Arrested in St. Louis
www.democracynow.org
Just days after her 90th birthday, Holocaust survivor Hedy Epstein was arrested Monday in St. Louis when she was part of a protest outside Missouri Gov. Jay Nixon’s office. Epstein was...